Picking and placing objects is something that we as humans take for granted. That's not the case for our mechanical(and electronic) friends. They have to

One of the most challenging projects that I did in my Udacity Robotics Nanodegree program was to control a 6-jointed robot arm to pick and place an object. 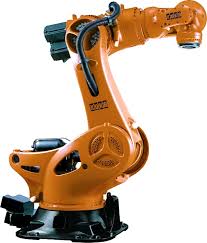 I was given a trajectory that the arm should follow to reach the object, pick up and drop it at a given location. My job was to perform inverse kinematic analysis to calculate the joint positions that will move the gripper along the requested path. 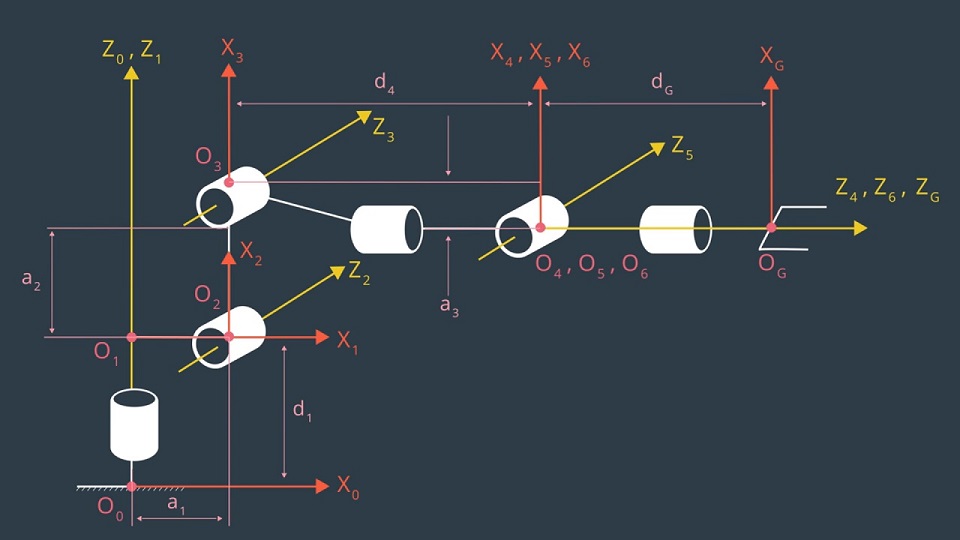 Fig. 1 : Shows the link frames(coordinate systems) choosen according to Modified DH convention discussed next. \(O_i\) is the origin for link \(i\) frame, and \(X_i\), \(Z_i\) are the \(X\) and \(Z\) axis correspondingly, and \(Z\) represents the axis of rotation(translation in case of prismatic joints). Since we are using a right handed coordinate system, \(Y_i\) can be calculated accordingly.

Here is a diagram of the gripper showing the degrees of freedom that the arm has, along with their reference frames. Computing through these transformations can become complex and tedious really fast. So, we use a convention.

The Denavit–Hartenberg(DH) convention is a commonly used system for selecting the frames of reference in robotics applications. They are particularly designed to cut out the number of free parameters required to specify the whole system. Here is an illustration, 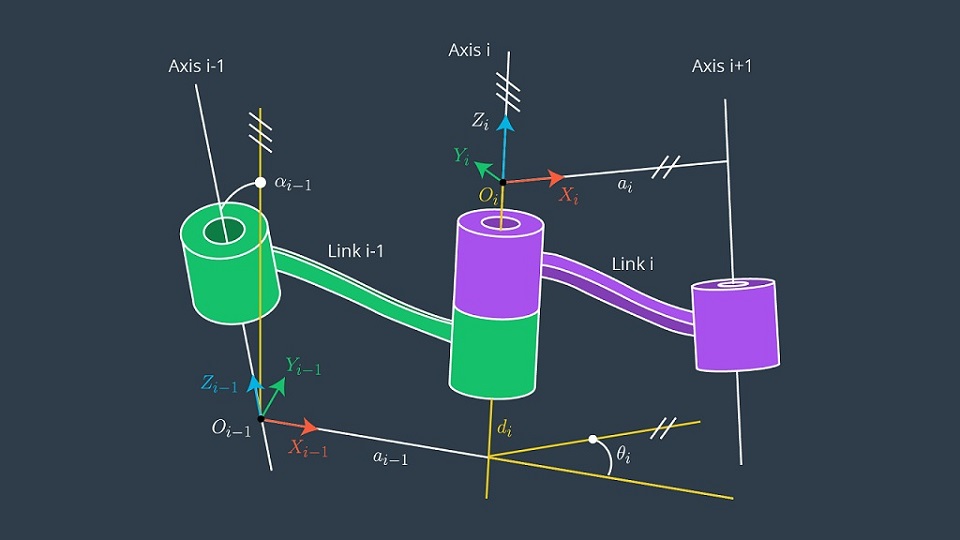 Which, when expanded analytically, turns out to be,

Now, we can apply this convention to our robotic arm and find out all the required parameters for further analysis. Here are the model specifications and final DH-parameters, 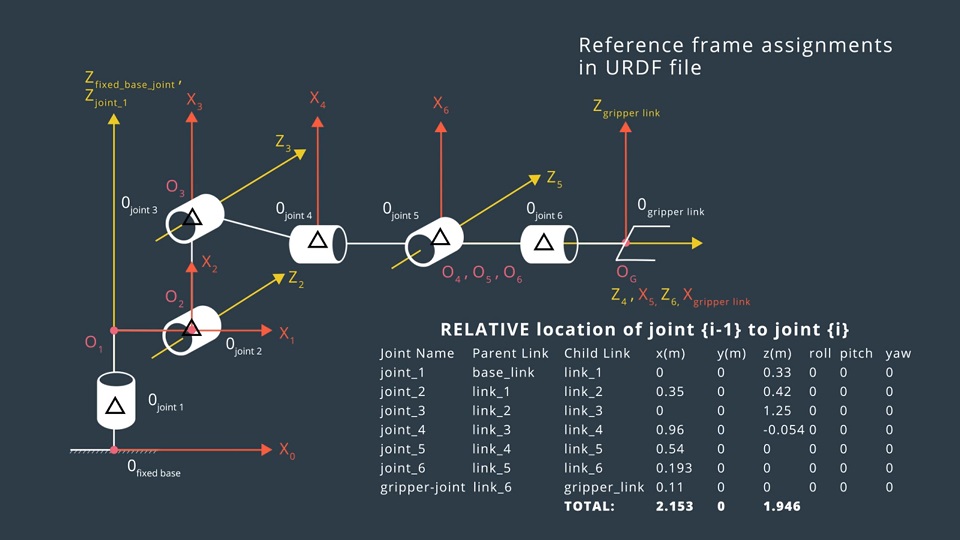 Referring back to the transformation equation (1), transformation between two links can be defined separately, we use sympy for symbolic computation, simplification and substitution.

Also, total homogenous transform between base_link and gripper_link can be computed as,

And, finally, the same total transform can also be computed given the gripper_link position and orientation w.r.t. base_link.Given,

Now, the total transform computed previously, \(T_0^G\) is gripper_link transform specified in DH convention(yellow). However, the transform calculated from gripper_link position and orientation is in URDF frame(green). These are shown in the following image, 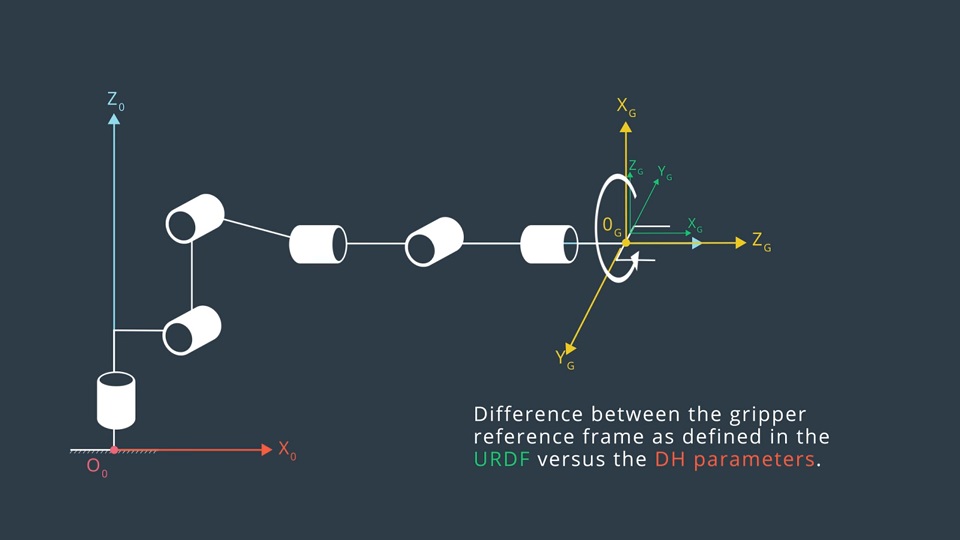 The last three joints q4, q5, q6 don't affect the position of Wrist Center(O5), hereby referred to as WC position.(this can be confirmed by running the Forward kinematics demo.) This is very convenient for us in decoupling the IK problem into a position and orientation problem where we can first compute the position of the WC(which gives us the first three joint angles q1, q2, q3) and orientation of the wrist , which gives us the last three joints q4, q5, q6. Detailed explanation follows,

So, the above equation displaces pg_0 by -d_g in the z direction.

From the above image, q1 can be calculated by projecting WC on X0-Y0 plane and calculating angular displacement from X0. i.e.

In the figure, position O2, WC are known and length A, B and C are known.

Symbolically : Just combine the symbollic transformations for individual links from link 3 to 6.

Finally we can evaluate this Matrix numerically by substituting q1, q2 and q3 calculated above

This completes the Inverse Kinematic Analysis of the Kuka arm.

Since all these computations are done numerically, they are bound to accumulate error, here is a plot showing the error in positions generated by the results of IK during a sample trajectory. 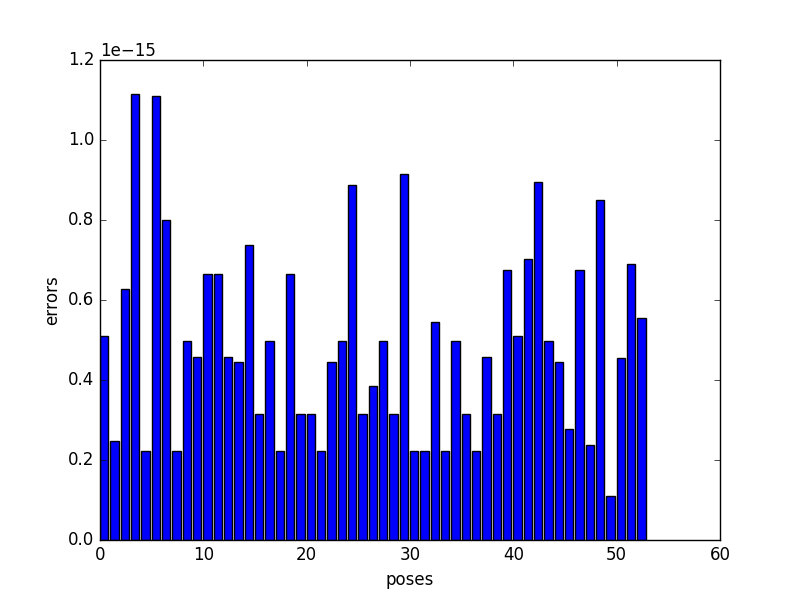 Such low error values show the stability of the computed trajectory using the analysis discussed above.
All of the code and more explanations can be found at my github repository.

Here is badly edited video of the awesome robot in action.